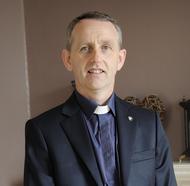 The Parishes of Dromara and Drumgooland are two separate parishes in the Diocese of Dromore but have been working as a pastoral unit since August 2009.  Each parish retains its own autonomy, has its own parish council, is financially separate but they co-operate pastorally when required.  The two parishes are served by the one priest, Fr. Peter C. McNeill.

The Parish of Drumgooland was divided in 1784 into two parishes: Upper Drumgooland, often referred to as Leitrim, which had six townlands, and Lower Drumgooland, often referred to as Gargory, which had 13 townlands.  In 2010 a discussion began amongst parishioners in regard to the reunification of the parish, the disadvantages and advantages of such a proposal.  The decision was to be made by the parishioners and a poll was held at all masses on the weekend of 9th/10th April 2011.  The Bishop was asked to reunite the parishes and this was formally done by the Bishop, Dr. John McAreavey on 15th October 2011.

Fr. Peter is a native of Annaclone Parish and was Ordained on 25th

time both were sent to Clogher Diocese on loan. Fr. Peter was appointed to

serve in Enniskillen Parish where he remained for a year.  On return to the

Diocese he was assigned to Clonduff Parish, living in Hilltown, where he

Granted a sabbatical year in 2002, he spent time on a personal development course in Wellsprings, Upper New York State and a three-month course on Spirituality in St Buenos, Wales.
The next opportunity was in Warrenpoint where he served until the end of August 2009.

This present appointment to come and serve the people of Dromara, Lower Drumgooland and Upper Drumgooland, as it was at the time, did appear daunting yet it was a call to work with people in a new way.  For Fr. Peter, personally, it has been an enriching time and he has served the parishioners tirelessly in their joys and sorrows.