1793-1796   Rev. Daniel Mooney, P.P. At a meeting of all denominations in Dromara on 26th. February 1796, to consider the disturbances in Counties Down and Armagh, tribute was paid to Fr. Mooney's "unremitting exertions to preserve peace and regularity within the parish."

1903-1907   Rev. John O'Hare P.P. A native of Donaghmore parish. He was twice driven from the Parochial House which he had built in Dromore by loyalist mobs during the later years of his pastorate. In September 1920 he became Parish Priest of Seagoe.

1920-1933   Rev. Peter McEvoy P.P. He was born in the parish of Lower Drumgooland. He was a prominent worker in the Gaelic revival movement in the North and was a personal friend of Mr. De Valera. He died on 7th. July 1939.

1972-1990   Rev. Bernard Treanor P.P. A native of Burren, he was an accomplished Irish Scholar and was awarded, during his time in Maynooth, a B.A. in Celtic Studies. He had a genuine love and enthusiasm for the Irish language throughout his life. Gifted with an excellent memory, he was a keen student of Irish History, especially local history, and was a recognized authority on Irish placenames. He was one of the founder members of the Dromore Diocesan Historical Society and was editor of its Journal.

1990-1995   Rev. Anthony Davies P.P. A native of Tandragee, Co. Armagh. He was ordained for the Australian Mission, for the Diocese of Bathurst. He was incardinated into the Dromore Diocese on 29th. April 1962 and was transferred to Clonduff on 8th. September 1995.

1999-2009 Canon Gerard McCrory - from Shankill Parish, Lurgan. which borders on Lough Neagh. Canon McCrory was ordained on June 11th. 1966, and appointed C.C. Donaghmore and in the following year, C.C. Rathfriland. In 1972, his duties were increased by his appointment as Instructor in Religion in Secondary Schools. From 1974 onwards, Fr. McCrory's responsibilities were centred in St. Colman's College, Newry, first as Bursar, then as Spiritual Director and, afterwards as Vice-President.

2009   Rev. Peter C. McNeill. A native of Annaclone, Fr. McNeill is the current PP in Dromara and in the neighbouring parish of Drumgooland. 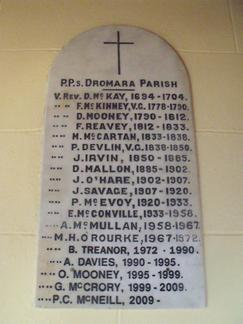