From a History of Dromore Past & Present by Dean Anthony Davies 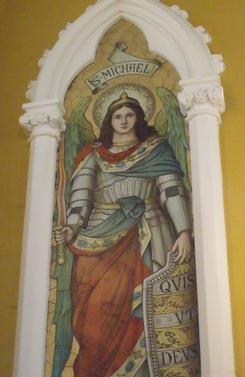 The building of the Church of St. Michael the Archangel began in 1825. It was

completed and dedicated by Most Rev. Dr. Blake in 1835. A former small chapel was

located to the rear of the Parochial House. The church was re-roofed and redecorated

the church this name.

The old green wooden hall, which had stood since 1920, was demolished

Cemetery
The Cemetery dates from the middle of the 18th. century. The oldest legible stone remembers Mathew Flynn, who died in 1767. Up until about 1820 some Catholic families continued to bury their dead in the cemetery of St. John's Church, Dromara. The cemetery was levelled in 1959. New pathways and a new entrance were made in 1973.